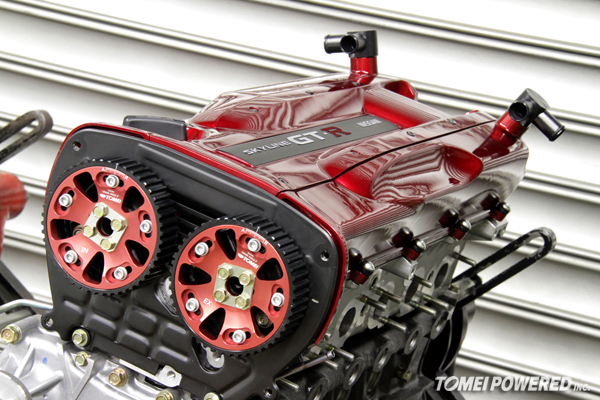 Here are the detailed information, broken down to explain in depth the benefits of owning a TOMEI ADVANCE SPEC RB26 crate motor. 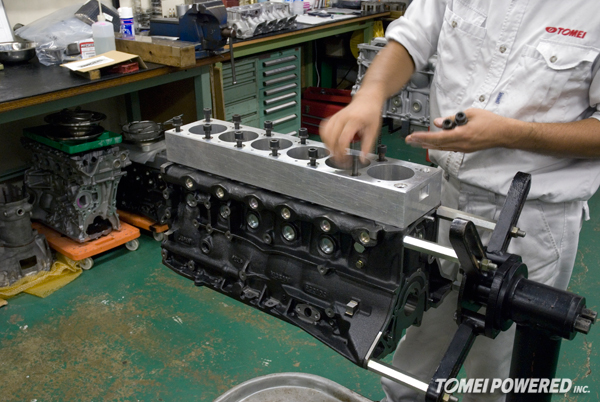 A well known fact is that when RB26DETT engine owners want to get serious, with performance, the N1 Block is the way to go. The ultimate RB26 cylinder block is the NISMO GT500 limited cylinder block, but those were made as a one off limited batch run, of which all have been sold out and discontinued. So the best option for performance available today is the N1 Block. These N1 blocks are extremely popular and are the best ones to use. Which is why we have chosen to use the N1 blocks on both the ADVANCE and our GENESIS engines.

The extra bonus is that we have bored and honed these blocks with our dummy heads. So these have had extra work done over the standard N1 blocks. And ONLY brand new Nissan N1 Cylinder Blocks are used. 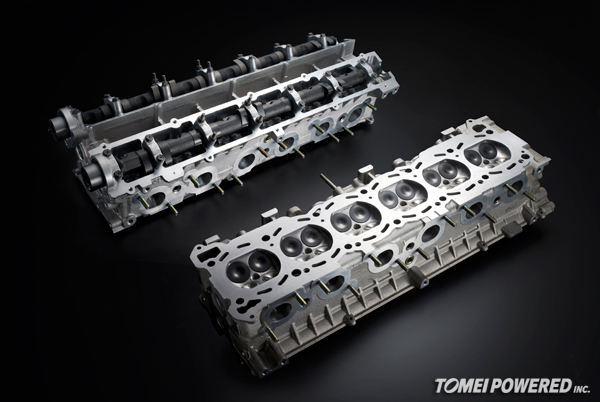 As with everything else, we have used only a brand new cylinder head. A fresh start with room to grow if your future projects requires it. (The photo is of the Genesis Complete Cylinder Head Assembly). 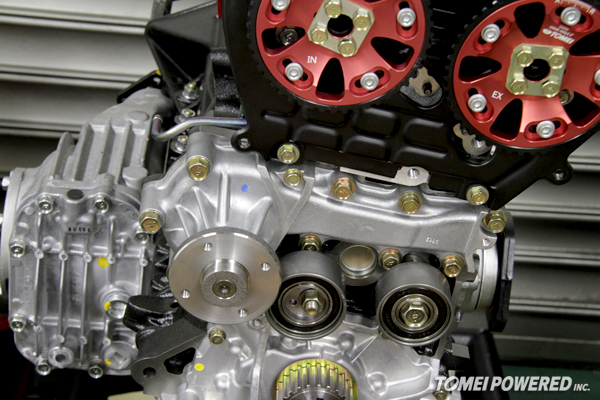 The race proven N1 water pump as designed and used by Nissan high end race cars. The 6 larger blades with an anti cavitation plate design pump. This is also included in the assembly. 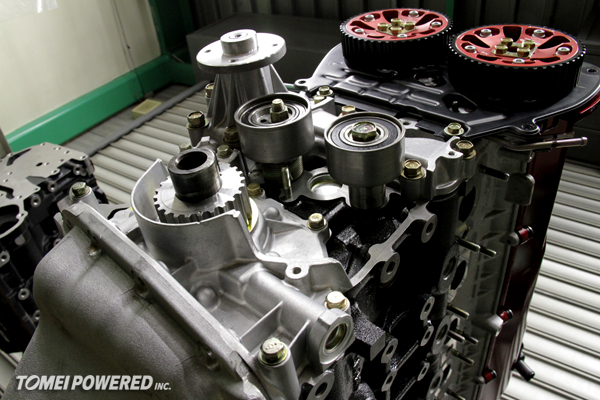 A common problem with RB engines are oil starvation and supply issues. The N1 Oil Pump was made for improved performance use, higher flow rate, stronger and improved durability. This is also included on the assembly. 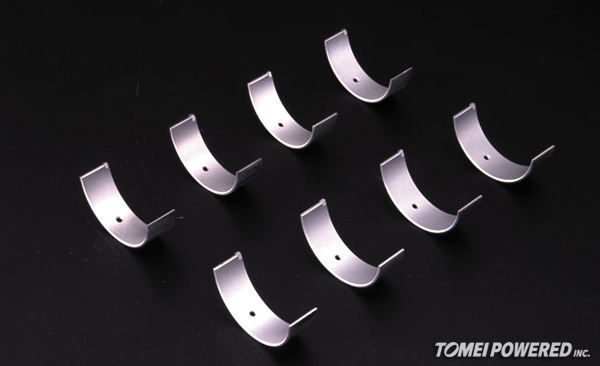 Do to the well know oil related problems that the RB is known for, these high performance use bearings are made by NISMO, to suit bigger horsepower purpose built RB engines, that are used for extreme motorsports conditions. Improved durability and performance proven. As used and proven on Nissan race cars. 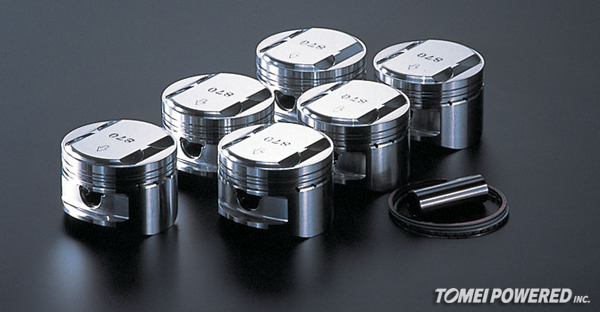 One of the most popular products that TOMEI is well known for. Our Forged Pistons! The larger majority of RB26 users in recent years, have learnt that the 600HP range is the best all round balanced power output for the RB26. Some say that the stock pistons are fine for up to 600HP, but to be safe, we’ve upgraded the Pistons to our forged Pistons. 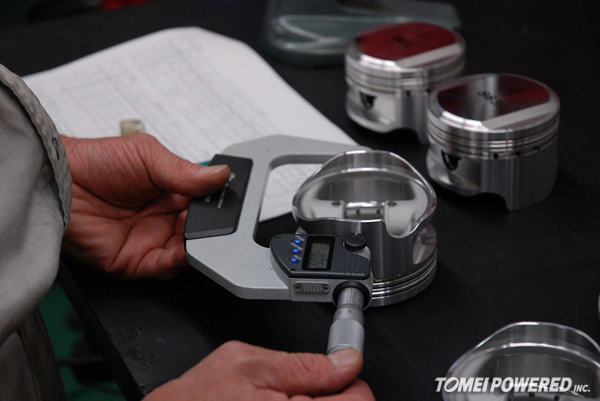 Since the stock pistons are limited to about 500HP (depending on the tune), users usually end up upgrading the Pistons to Forged Pistons. So we have decided to upgrade these to solve this problem. 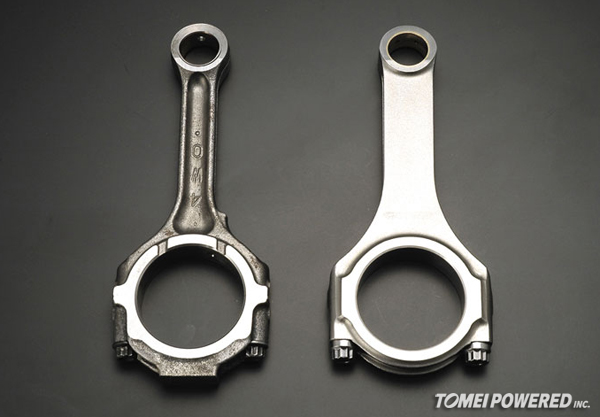 Another weak point addressed. The stock conrods limit is about 550HP at best. For those who want to upgrade the turbo to a larger one later, you can rest assured that these rods won’t let you down. They had supported monster builds that pump out well more than 1000HP, without problems. 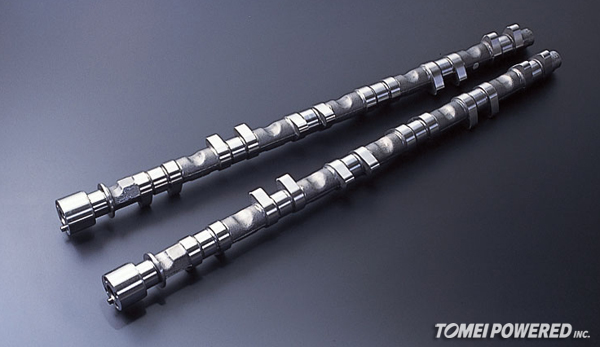 The most common overlooked part, are the camshafts. We chose to include our Type B PONCAM camshafts, suited for street and track use. These compliment  larger turbos of N1 spec+ very well.
TOMEI TIMING GEAR ADJUSTABLE PULLEY (IN/EX)

Our Duralumin Adjustable Cam Pulleys have an all new color! These will be included to allows for more tuning options to suit the users needs. Proven for a decade to be reliable. This time, we’ve only given it a new look. 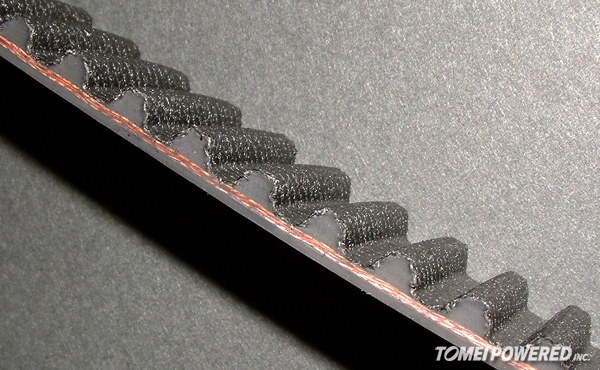 This simple yet vital part is addressed. The stock timing belt is just not strong enough for higher powered applications. The strength of the timing belt is important, not only for keeping the timing in check, but also if it slips or fails, your tune will either be out, loss of performance or engine failure. 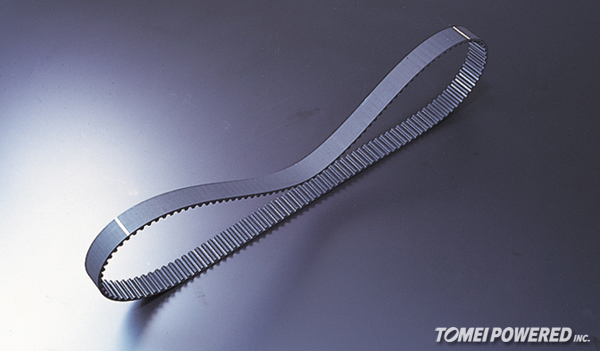 Our Timing Belt will allow you to go more if you have the need for more power. 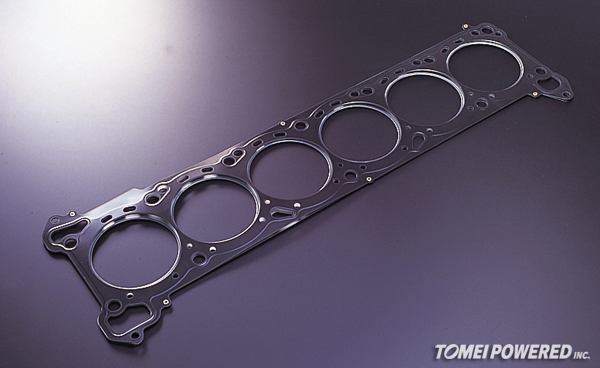 Another weak point addressed. The standard metal head gasket is usually one of the weakest points in the RB26DETT engine design. When boost is increased, the combustion pressure is also raised. The Metal Head Gasket helps strengthen your engine to handle more power with the increase in sealing efficiency. Another common weak point of the RB26 engine is the gaskets of the intake and exhaust assembly gaskets. So we also recommend these to be upgraded too when you do the final installation. 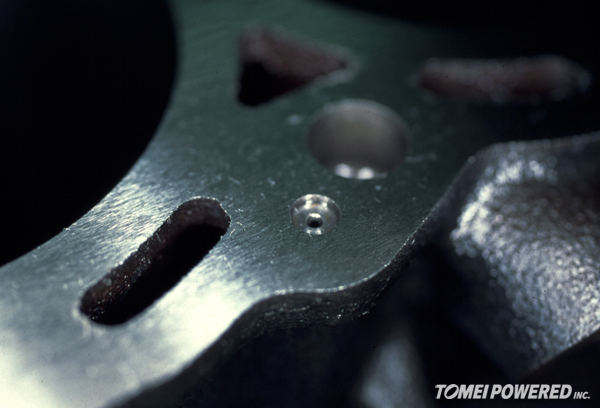 Yet another oil supply weak point addressed. This time the oil is being over supplied to the cylinder head. So to rectify the problem, we have designed an orifice which restricts the oil flow instead. So no fancy baffle plates or oil return mods to the sump is needed. 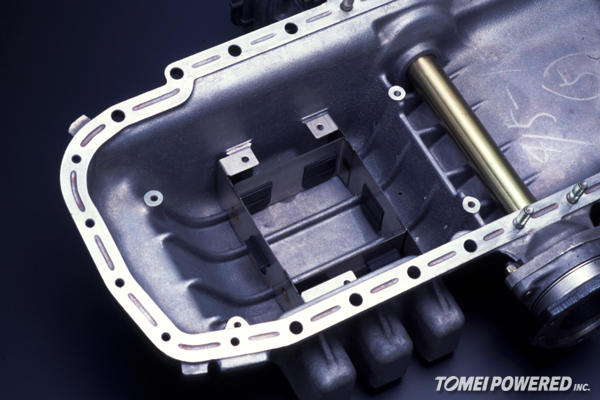 What many GTR owners had found (usually in a financially painful way) is that that the stock oil pan is not suited for performance hard driving use. Especially under hard breaking. Like when entering a hairpin after a long straight (Fuji Speedway, turbo 1). 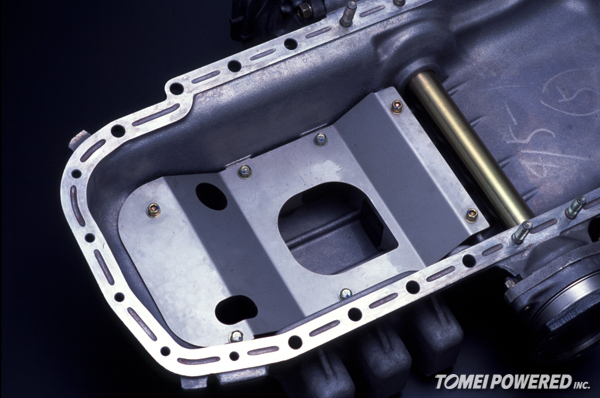 All the oil shifts forward, that split second when there is no oil around the oil pickup, the bearings and other vital areas then fail. So the end result is terminal engine failure. So we have addressed this weak point by installing the Tomei Baffle plate in the engine.

Each of our complete engines, are logged with a Serial Number. These Serial Numbers indicate the complete recorded details of the build here at Tomei. We keep logs of all the details of the build for that particular engine. This is how we can always look back on the historical records of each and every engine assembled here at Tomei. Should there be any issues in the future. We then will have details to look back on for reference. This unique plaque also improves your cars value and differentiates with other plain RB26 engines. It’s the signature mark of a complete Tomei Built Crate Engine. 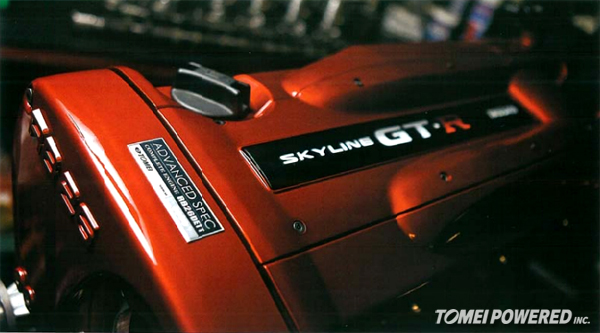 What are the differences with the ADVANCE SPEC and the GENESIS?

Well the GENESIS engines have a lot more precision work done to them, with full Cylinder Head and Cylinder Block work done. The GENESIS engines comes with the Tomei Crankshaft, valve train upgrade (depending on which Phase model you chose) and are built for high end street use or full race use. Based on years of research, complied data from previous race engines results. The Genesis is the epitome of Tomei. 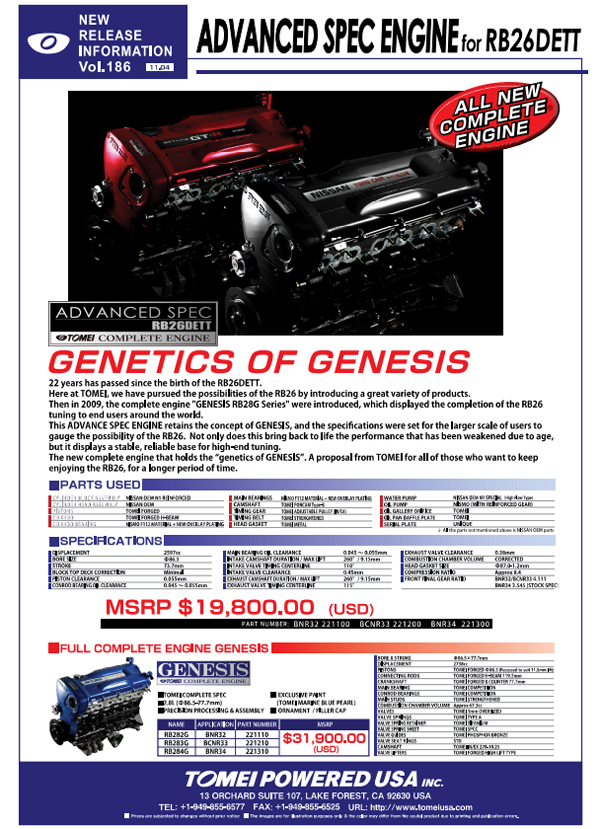 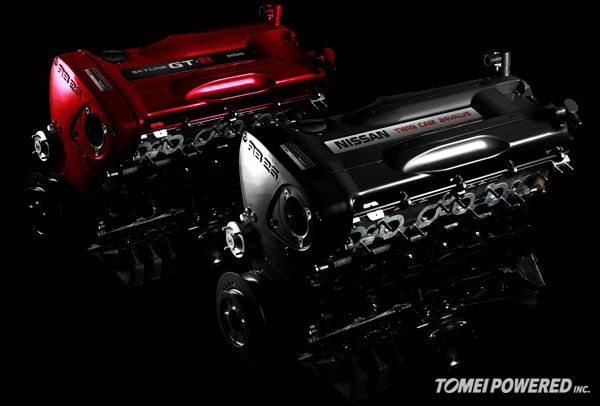 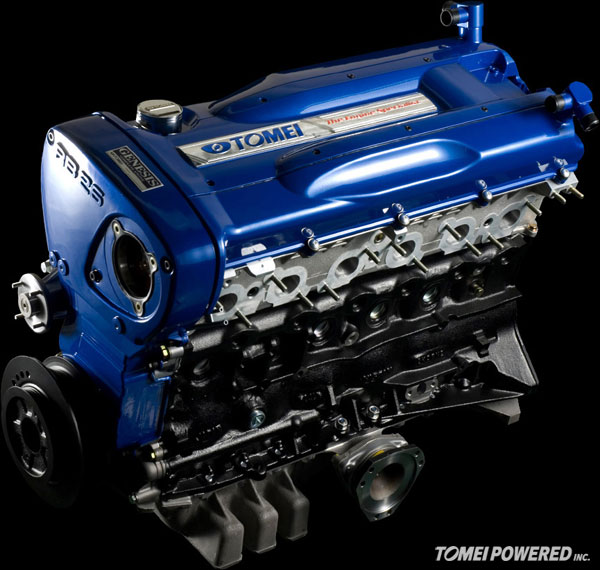